This blog is to tell the story about the search for and the upbringing of our new German Shepard. We live in Sydney a pretty dog friendly city so we are looking forward to many outdoor adventures!

6Months on the Button!

Murphy is 6months today and for his half-year birthday present we got him neutered! The poor bugger. The vets tell us it all went well which is good. He has a giant cone on his head and he is pretty grumpy but apart from that he is eating well and resting which is good. He’s missing being about to lick his groin and scratch his ears but he will be back to doing that in a week so I hope he can hold out. Something that I didn’t know but I suppose it makes sense is that neutering costs are based around the weight of your animal. So I was guessing Murphy weighed about 17KG but when he was popped onto the scale he was a massive 25KG. I couldn’t believe that. On a booklet the breeder gave us there is a sizing chart you can have a look at how he is progressing for his age and weight; he is off the chart… aiming to be bigger than 36KG for a full adult :-O. He is not overweight or anything close to it so we will see what size of a monster we end up with a good few months down the line. 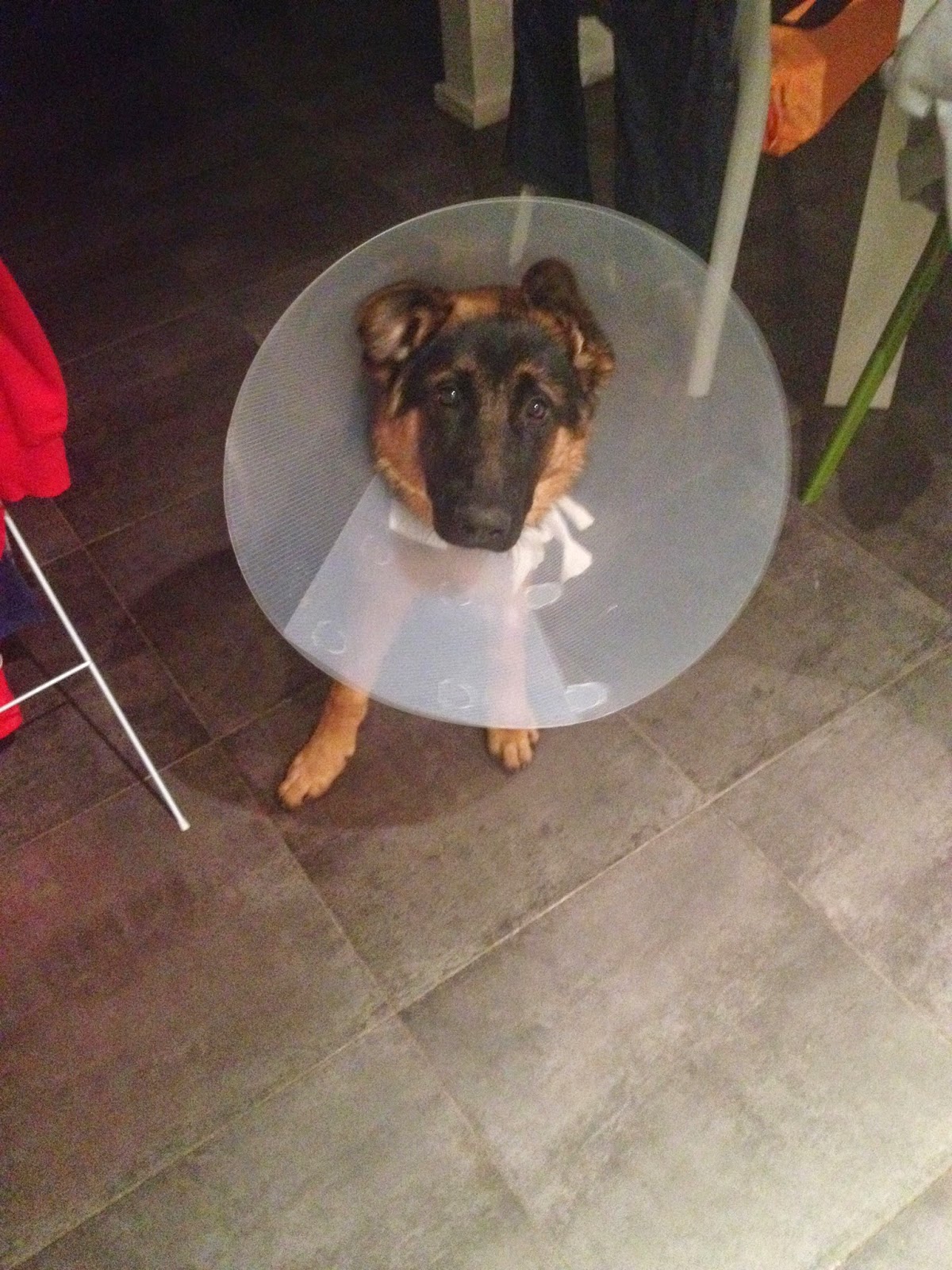 Even though he sounds to be getting really big he is still such a playful puppy and he loves all people, kids, other dogs and birds. He is walking better on the lead, still pulls gently, I’m confident that after a few more months of work and he should be walking perfectly on the lead. Mark brings him to big dog training in Leichhardt Dog Park every Sunday morning and he is doing so well. They base what class he is in based on how good a handler you are with him. So you graduate through the classes not him. So I brought him one week Mark wasn’t able and we graduated to 2nd class but Mark still had to show up the next week and do Class 1 and then at lunch time go to be tested for class 2. It’s a really good way of doing it as dogs behave differently with different people. So we are a level playing field again but I had my week of gloating J

Murphy is still going to doggy day care it’s really great for him and us. He gets out of the house while we are at work and gets to socialise with loads of others dogs. I’ve been told he finds his favourite girl dog of the day and he just follows her around. At least he is having fun. I wonder will that change now that he has been given the snip. He can’t go this week but we will find out the following week. We’ve had a few friends’ in-between new jobs and back from fly in fly out who come by and walk Murphy on non-day care day, which has been great for him. He has such a lovely temperament that everyone loves taking him out. 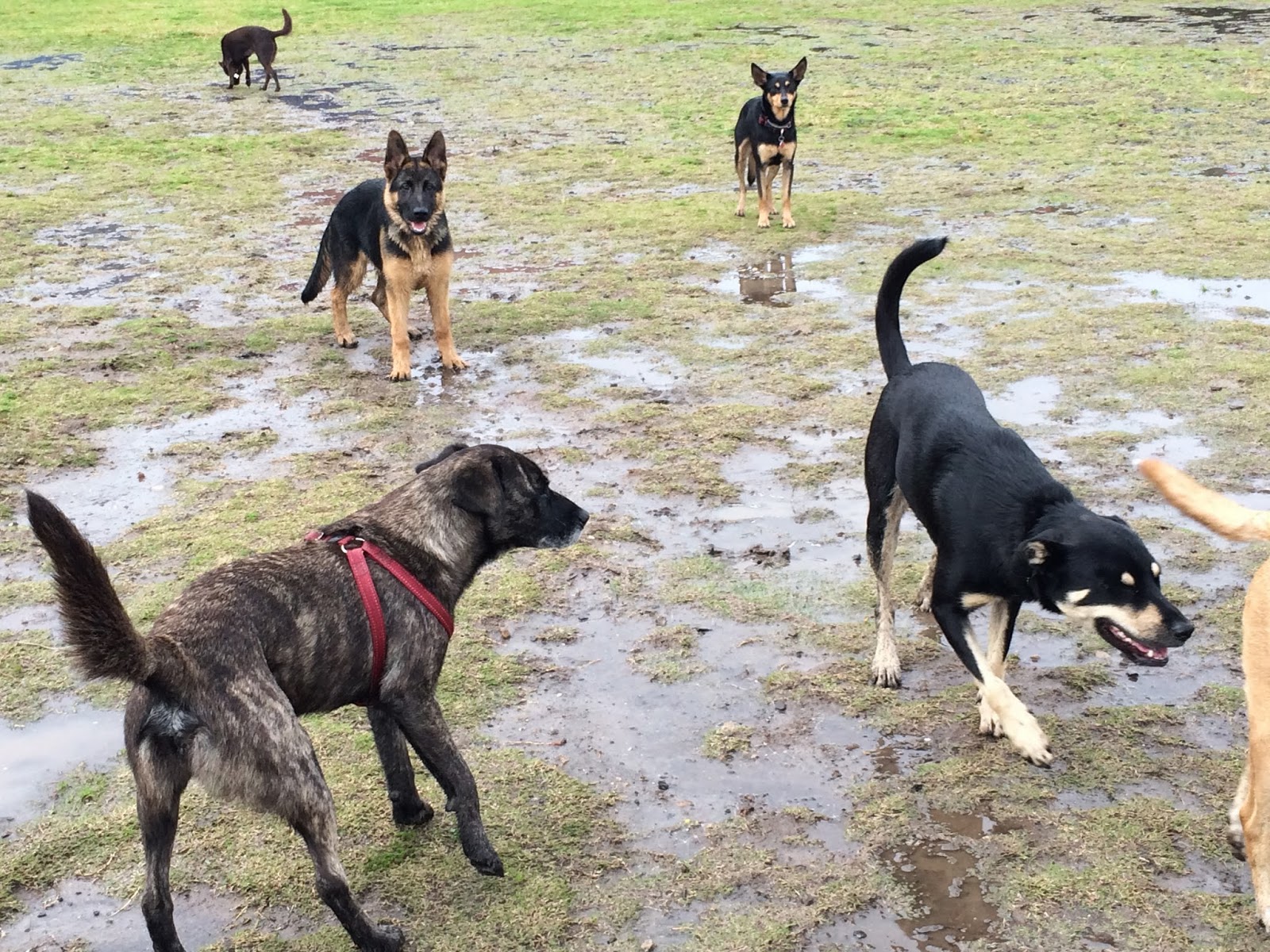 Other trainings have been going well. He knows sit, drop and stay like the back of his hand. Now I am working on his reaction times to doing them once we say it and the distance I can be from him to get him to do them. It’s challenging but it will be worth it.

Murphy’s first holiday is coming up. We were very surprised we were going to be able to take him but it has all worked out so well. He is coming to Mudgee with us, which is wine country about 4 hours from Sydney. Our friend Lorraine has orgainsed it and went to the trouble of finding dog friendly accommodation for ~13 people. Which is fantastic but not only did she do that she also asked the bus driver of our wine tour if Murphy can come on the bus and he can! It’s amazing. It means he will be able to be with us the whole time! It’s going to be great. So I am trying to teach him a special trick for the bus driver for letting him on. I’ll get a video of it if I manage it and post it soon.

Our back garden still has seen better days. With it now being winter the grass isn’t getting any sunlight practically so the areas where Murphy has dug and peed on are looking pretty sorry for themselves. I’ve covered the main bad areas with chicken wire to prevent Murphy from digging there anymore and he only tore it up 3 times :-/. I gave him a good tellin’ off and some sticks to rip apart instead so he has left it alone since which is good. Murphy destroyed his lovely foam bedding for his crate a good while ago so with the cold weather coming in Mark was very nice a bought him a new one. We were only putting in at nighttime so he didn’t tear it during the day when we were out. It was going really well until he didn’t want to go to bed one night and after eventually coaxing him in he settled down and went to sleep. Well that is what I thought. The next morning I come out to wake him up and I discover that he has done a number on the bedding. Ripped it all to shreds again! It was so ANNOYING. Another lovely bed destroyed. Because it is still very cold through the night here and he was getting neutered we needed to replace it… I headed down to the local Hot Dollar store and got him the cheapest bed I could fine. It’s pretty ugly but it keeps him off the cols plastic base of the crate and it’s not full of foam that he can rip apart. So he has that now. Maybe one day he can get a nice one again but it’s not on the agenda anytime soon. 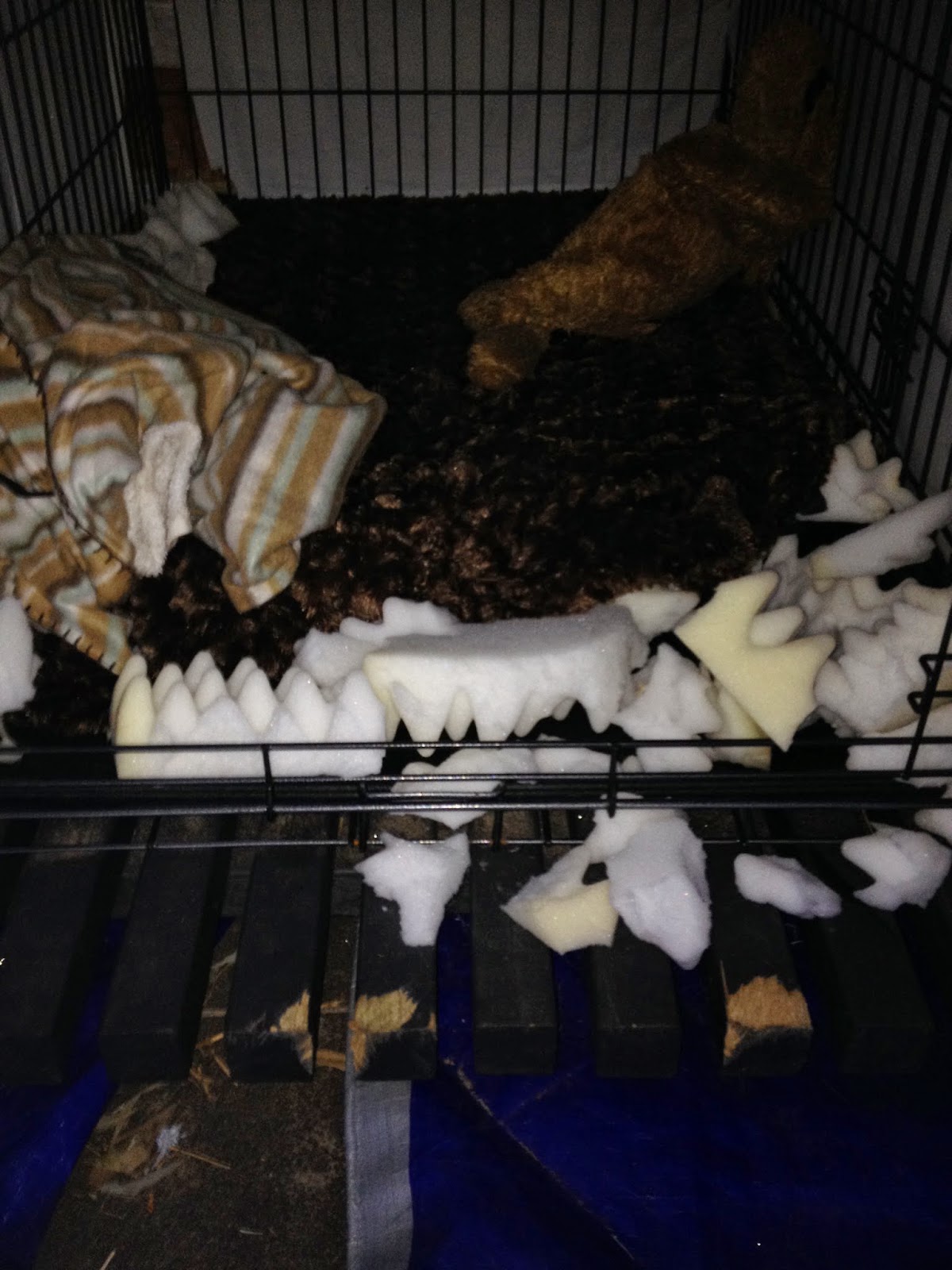 His coat has changed colour a lot over the last few months. I am still not sure how he is going to look when his full adult coat has come in. His legs and chest are all tan. When he is sitting facing you it appears like he has a gold v-neck chain on, it’s very cute. The top of his head is also tan and apart from a strip of tan across his shoulders the rest of his back is black. So he is a bit of a mixture at the moment. He doesn’t appear to shed too much and then I sweep up and these little balls of fluff are everywhere. I suppose I am thankful for now he doesn’t leave anything on our clothing or hands when we pet him. 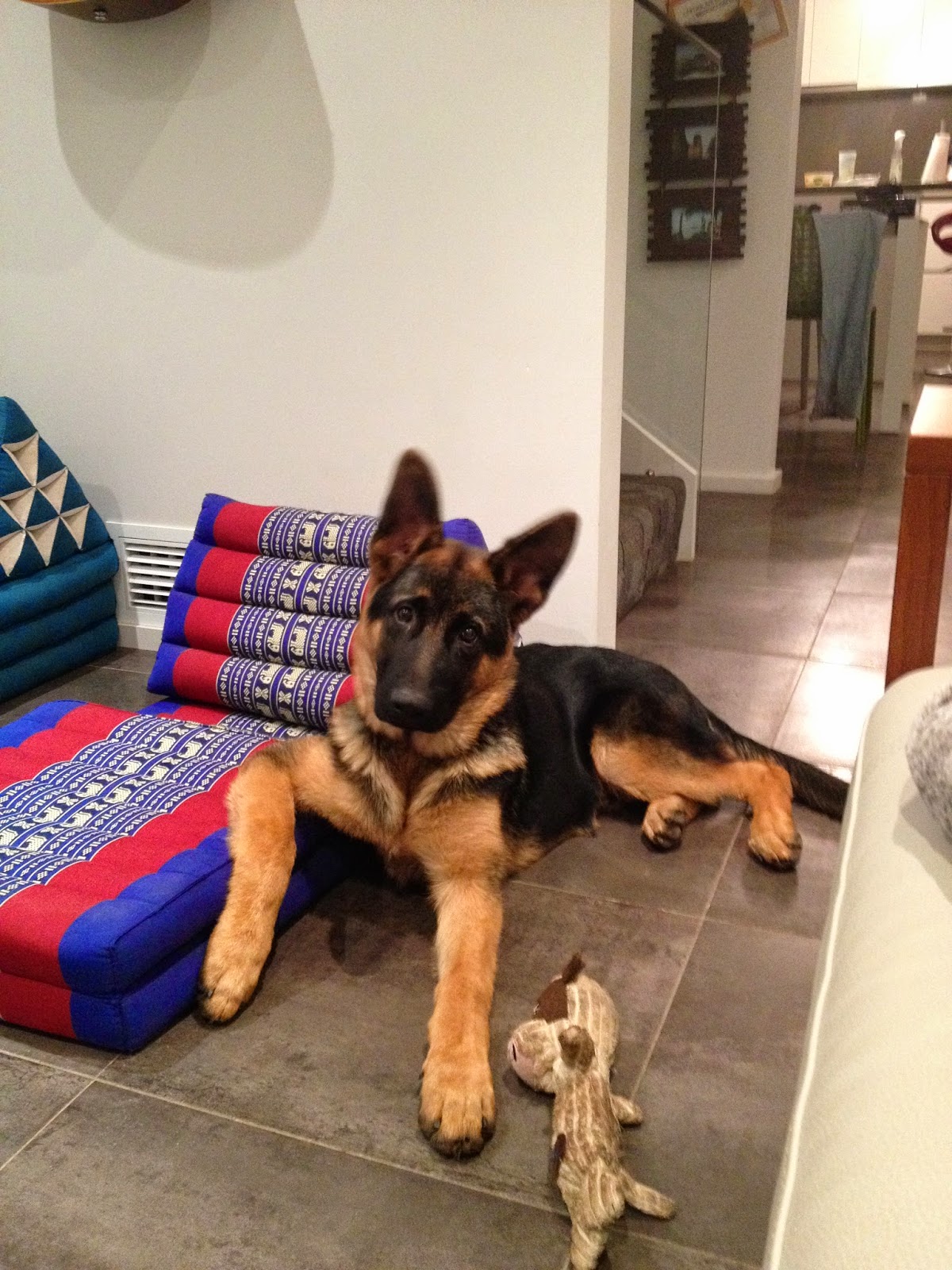 House rules still haven’t changed. He is not allowed on the couch, upstairs or passed the kitchen bench into the hallway. He shows interest in the stairs when one of us goes up there but apart from that he never tries to go up there. The couch he is generally good at. When we are playing with him he sometimes puts a paw up on it but he hasn’t jumped up at all and I hope he never does. The kitchen bench is always a hard one. Some days he very well behaved and others he is half way down the hall after you! He is a good puppy otherwise. Completely toilet trained for the car, house and crate. He doesn’t bark or make a noise when we are not here. In general he doesn’t bark anyway only when he is excited and in the dog park. We were watching a TV show one evening and there was a search on for a man and they were using dogs and of course the dogs started barking chasing the guy and Murphy jumps up and starts barking at the TV as well. First time we heard his proper dog bark it’s quite impressive.

Well I think that is it for me today. Apologies for the long delay in posting, I’ve been working crazy hours and the thoughts of looking at a computer screen again in the evening are painful. Until next time, I will leave you with more insights around neutering.

Neutering in my opinion:
Why do it?:
There are two mains reason in my head,
1. To prevent testicular cancer in males.
2. If you are not going to breed a male it is unfair to have him fully sex and not being able to procreate. If you have a full sex male, females in heat with seek him out to mate and so you will have a dog wanting to chase any female and wanting to get out of the back garden at all costs. So it wouldn’t be a fun time each month going through that. For females it’s good to neuter because like human femlaes they also get a periods each month so to avoid that it’s a good idea. 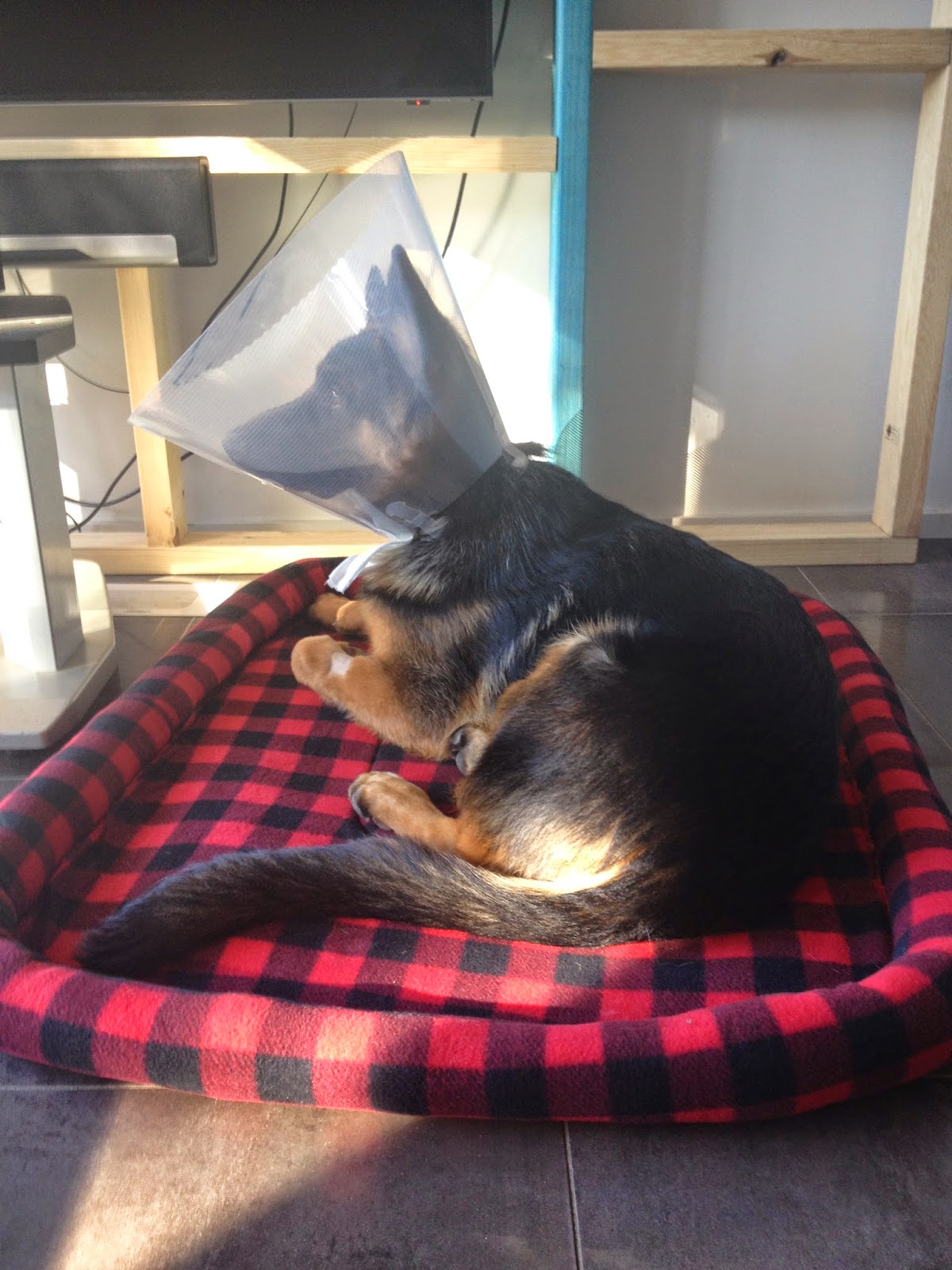